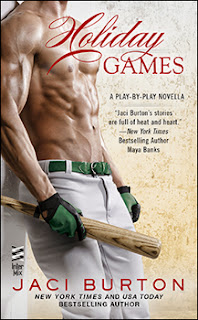 A Riley wedding is in the works, a Riley Christmas means a house full of family, and baby making is on Liz Riley's mind. Chasing Gavin around and meeting in dark closets can be fun, but Liz is more than a little determined. Even with family in every corner of the house, Gavin is more than ready to do whatever Liz wants—especially when sex is involved. It's a Riley family Christmas.

Read the beginning of Liz and Gavin's romance in Changing the Game! 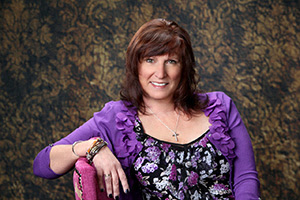 ABOUT THE AUTHOR: I'd like to say I always wanted to be a writer, but that's not the case. First I wanted to be a teacher. When I was a kid I used to play school in my friend's basement. She had actual school desks—and index cards. I'm a list maker, so those index cards rocked my world. Then later on, I wanted to be a nurse. My other friend had a stethoscope and a medical book. I had a thing for props, okay?
But during my early teen years my cousin and I—back in the day before the internet –would exchange scripts we'd written of a popular TV show. No, I won't tell you which TV show because then you'd know how old I really am. But it was a western with two gorgeous cowboy heroes and we were each in love with one of the main characters. I'd say that was my first foray into writing, and it got me hooked.
As an adult, marriage, work and raising two sons took priority. And while I fell madly in love with reading romance, there wasn't much time to write it. It's amazing how much corporate life, soccer games, high school musicals, dinner and laundry can suck out of the average day. But I would occasionally dabble in writing, then put it aside when I got busy. Unfortunately, I was always busy.
Eventually my kids grew up and I was on my second marriage when Biker Dude (what I call my husband because of his love for his Harley Davidson) found out I used to dabble in writing and encouraged me to try again. So I did.
I sat down and wrote a romance novel, start to finish. I was so proud of it, but I didn't sell that romance. Not right away, anyway. I didn't sell the one after that, either. Or the one after that. Suffice it to say I wasn't an overnight success. But eventually I did sell a book, then another, and then another. I have an exceptionally smart agent and write for amazing editors. I'm a USA Today andNew York Times bestselling author, and I have you wonderful readers to thank for that.
This has been a dream come true for me, one I wanted for so many years. Writing is my full time career and something I love so much. I can't imagine a day that isn't filled with hot, sexy heroes who save the day, strong, capable heroines who don't need a man to save them, and the happily ever afters in every book.
Sometimes I even write about teachers and nurses. And hot cowboys.
I live in northeast Oklahoma with Biker Dude and our wonderful, crazy dogs. Between us we have three kids who are all grown up and living out in the wild. When I'm not writing I can usually be found in the garden, coaxing the tomatoes to grow, heading out to our local casino trying to become a millionaire (so far, no luck there), or riding on the back of Biker Dude's Harley. And when I want to relax I read other authors' masterpieces or I'm parked in front of the television watching sports, reality TV or crime shows. And maybe a drama or a comedy. Okay, I really watch way too much television.
Welcome to my world.
CLICK BELOW TO BE TAKEN TO MS. BURTON'S WEBSITE:
JACI BURTON

MY REVIEW:
I'll keep my thoughts short and sweet.

This was NOT one of my favorite books in this series. Granted I've only read the first three but I thought it would be more focused on JUST Gavin and Liz. That said, I did enjoy appearances by the other characters from this series. I also thought that although many of things I love about Ms. Burton's style were present here in the novella- the heat and emotion- at times the novella felt a bit clunky.

It was still enjoyable and I would recommend to fans of the series.


AND DON'T FORGET TO CHECK OUT WHAT MY BEST FRIENDS HAD TO SAY:
ANN- ROMANCING THE READERS
KAREN-THE MANY FACES OF ROMANCE